In the days of old, the crossing point of the estuary was known as the tar and the place was colloquially known as

This river was a popular waterway. The tar played an important role in the development of Mapusa in the days of inland river transport by patmari (sail boats) and ponev (canoe). It was a landing point for all kinds of agricultural products, fruits, Vegetables, rice, spices, timber, bamboo, Mangalore tiles and other commodities.

Essential commodities like wheat and Elephant brand kerosene tins, without which the Goan population could not survive, were also transported from Mormugao harbour directly to Mapusa via th 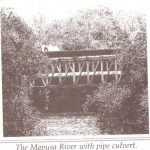 e river. Not only the common man but also the elite needed kerosene to light their chimney lamps, Aladdin lamps and petromaxes or to start their kitchen fires.

Mapusa’s strategic position, close to the river, made it an important trading town, centuries ago. Decades back, a launch service connected Aldona to Panjim down the river. The service was disconnected one the road network improved. Mapusa is the largest town located on the banks of this river.Ganesh idols were also immersed in the estuary, a practice which continues.

The Portuguese planned the New Municipal market close to the river to easily transport items from Mormugao port and other neighbouring waterways to the town.

Boats, for which the tar was originally built, cannot come to it now because the PWD (Highway Division) in its wisdom decided to erect a pipe culvert instead of a regular box culvert or bridge on the highway bypass.The once – important Mapusa River is no longer a transport artery. Its banks have been reclaimed for construction and its waters, clogged by urban refuse.