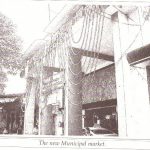 I personally witnessed the construction of the New Municipal market and entered every shop when the market started. Some old timers in the market know me personally , some having passed away and their businesses are now run either by their sons or grandsons – mostly by the third generation.

Primarily, the new market comprised three blocks with a total of 164 shops. Now, after sub-dividing some shops, the total comes to 173 shops. The first and second blocks are in two straight rows; the third block was built in an L shape. As such, it has East and West wings, as visible on the chart alongside.

The market’s main entrance is between Shop No. 1 and Shop No. 36. On either of the side walls of the entrance, and on the top front wall, there are murals depicting Goan social life.

Sub-entrances are located on either side of the block between Shop No 32 & 33 (front) and 22 & 23 (back), and 4 & 5 (front) and 14 & 15 (back). To provide security for jewellers, who were and are still mainly located in the first block, the roof of the irst block was built with a concrete terrace. Roofs of the second and third blocks, the original fish market and shops around it, were covered with asbestos sheets, which are still in use.

To remind ourselves, here is the list of shops in the New Municipal Market that existed since it launched on January 2 , 1960. The post-Liberation shops are not included on this list. 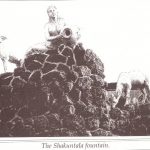 A little after the main entrance to the New Municipal market, in between the first and second blocks of shops, almost in the middle, is the Shakuntala fountain, considered to be a landmark of the Mapusa city market. It was inauguarated on April 12, 1962, by Major General K.P Candeth.