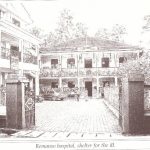 Next to Remanso Hospital is the now disused Asilo Hospital. According ti Dr. Jaime Victor Rangel, the history of this prized possession of Bardezkars is interesting .

Asilo is a Portuguese word that could means home, shelter, asylum, refuge, retreat, haven, sanctuary. It was started by accident. In 1863, citizens of Bardez organised a farewell for the respected Portuguses judge Tomas Nunes de Serra e Moura of the Bardez Comarca. An amount of Rs 1180, a princely sum them, had been collected. 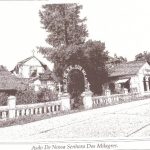 Judge Moura felt that instead of an ostentatious celebration, the money could go to a worthy cause that would benefit the public.Efforts of Fr. Sebastiao Zeferino Gabriel Botelho of Nachinola, Professor of French in Mapusa, Fr. Antonio Reginaldo de Mendonca of Colvale, a former Vicar of Sadashivgas, Karwar, and Joao Batista de Mendonca (a nephew of Fr Antonio) bore fruit in 1975, and the Home for the Aged became a reality. It was named Asilo de Nossa Senhora dos Milagres, dedicated to Our Lady of miracles.

Fr . Botelho and Fr. Mendonsa looked after the Asilo in its initial stages with utmost devotaion. By the turn of the century, two large halls had to be added to accommodate more residents. In 1911, at the initiative of Dr. Antonio Filipe Cordeiro, a hal was added, and, in 1921, Dr.Daniel Gelasio Dalgado of Assagao created a fund of Rs 1500 to start a dispensary offering free medicines to the public. The Asilo also pioneered the first leprosarium in Goa, housed onthe hillock opposite the home for the Aged, where it functioned until the Leprosaria Central at Macasana, Salcete was started in 1932. Even then, the Asilo granted 2000 rupias yearly to the Macasana Leprosarium as a subsidy. In 1915, the Leprosarium of Asilo dos Milagres has 40 patients.