Behind the old Primary School, there was the Saraswat Vidyalaya, one of the oldest Marathi-medium school in Mapusa. The building still exist and it is occupied by the Goa Urban Cooperative Bank Ltd. The school has been shifted to Telangvaddo, Khorlim, and now has a higher secondary and two colleges on the campus 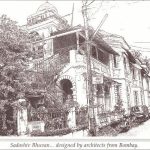 Behind the old Saraswat School, near the police station, there is the palatial Sadashiv Bhuvan or the Natekar Buliding. It was built in 1933, the year the town was designated a cidade (city)

The Natekars were wealthy cloth merchants. The Bhuvan was built by Damu Sadashiv Shet Natekar. Presently, the house is occupied by Damu’s 72- year old grandson, Devidas and his family. According to Devidas, theirs was the first big house with a fancy design in Mapusa. The architect, who was brought from Bombay, also buit the Administracao das comunidades de Bardez building the same year; hence, there are similarities in the outer pattern of arches of these building.

The house is a two-storeyed structure. It has a balcony; two sitting rooms or halls one on each floor; six bedrooms-there on each floor; a prayer room, dining hall, kitchen, two toilets and bathrooms-one on each floor. All the rooms are very spacious. The wooden roof is hidden with a false ceiling. It is not made of wood or gypsum powder sheets, but of square brass sheet, each with beautiful designs. The balcony entrance has six arches and two arched doors. The right side of the house facing the road has eleven arched windows-six on the ground floor and five on the first floor. Each front gate pillar has a peacock replica fixed on its top.

According to Devidas, their house was the first in the area to have a G. Marconi brand radio. People from the surroundings gathered there to listen to the news. They were also one of the first people in Mapusa to own a Ford car.