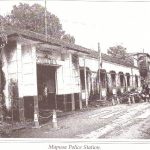 The dress code for the Portuguese policia (police) was khak trousers, shirts and brown shoes with long khaki stockings. Some of the police posittions during the Portuguese regime were:

The last four positions were given only to Europeans. The soldados or constables and cabos or head constables wore skintight short pants and short –sleeve shirts. The officers wore long trousers and long- sleeve shirts. All police personnel wore a police hat. Beginning with the cabo, each officer was given an Italian- brand Beretta pistol. The guards used German-brand Mausers rifles.

There was a cabo at Mapusa Quartel known as Cabo Sukddo, who hailed from Pernem. His close colleagues and friends greeted him as Rampa Sukddo! People feared him beacause he was pro- Portuguese- he provided information about the Azad Gomantak Dal to the Government.

On Liberation Day, some Khorlim residents wanted to get rid of him and Sanches, but of them managed to escape. They (Agostinho from Khorlim, Sirsat from Parra, who later served as a Security Officer in the Secretariat, and Teofilo from Mapusa, all now deceased) even came to Anjuna in a black Mercedes car loaded with dozens of hand grenades in the rear dicky but they did not find them in our village.

Police drivers in those days were very rough-they exited the Quartel with their jeeps like rockets! If we heard the accelerating sound of a jeep coming out from the Quartel, we would wait until it left and took off like an airplane! Cabo Sukddo was one of the rash drivers of the time.

The Quartel also had message carriers called pilotos (pilots), who carried messages on their motorcycles from Mapusa to Betim and then to their motorcycles in Panjim and vice-versa. Cabo Sukddo was one of the pilots; he rode a BSA motorcycle. Speaking of pilots, we now have motorcycle “pilots” in Goa, who transport people on their black – and- yellow two- wheeler motorcycle taxis.

One of my senior Escola Primaria mates, Innocente D’Souza from Chinvar, Anjuna, joined the then police station. He retired a few years ago as an ASI (Assistant Sub-Inspecto).

In the yesteryears, when the Quartel flag was taken down every evening at six, the police would play would play the bugle and immediately movement on the street came to a halt. Anyone who kept walking while the flag was being lowered was taken inside the Quartel and punished