Mapusa is a small town clustered around the Mount (Alto). The name Mapusa is thought to be derived from the Konkani word for a ‘measure’ – ‘map’ and the phrase fill up – ‘sa’. Ancient Goan agrarian community had a well established Gaunkari or Community Farming System, where villages formed associations, worked on community land and shared 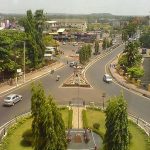 profits. Market day was a major event, with goods brought in from every district to one central area. Mapusa has thus remained a prominent market center for many centuries.

Mapusa is located at 15.60°N 73.82°E.[1] It has an average elevation of 15 metres (49 feet).It lies on the banks of Mapusa River. Mapusa has a tropical climate with temperatures ranging from a high of 37 °C in summer with high levels of humidity to a low of 21 °C in winters.

Mapusa is close to one of the main centres of Goa’s tourism industry. Mapusa’s proximity to many beaches in the north Goa makes it a suitable base during the tourist season (November to April). Because it is a mainly commercial town (for locals) with a large resident population, Mapusa has only a limited number of hotels and accommodation. 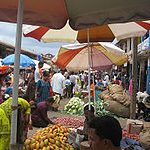 Mapusa comes alive on Friday, the traditional market day also known as Mapusa Friday Market. People from surrounding villages and towns come to Mapusa to sell their wares. This fair has a lot of local flavour (unlike some other tourist-oriented fairs or markets) and specialises in agricultural produce, vegetables, locally-grown fruit, spices, clothes and even plants (mainly during the monsoon planting season).

The most famous shrine Shree Dev Bodgeshwar Sansthan of Lord Bodgeshwar, located on the 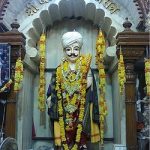 outskirts of the town in the middle of some rice fields, which is beautifully lit up at night and draws thousands of devotees for its annual Jatra.

Church of Our Lady of Miracles, founded in 1594 and rebuilt several times since, the Church (also known as St Jerome’s), around 600m east of the Municipal Gardens, is famous more for its annual festival than for its architecture. It was built by the Portuguese on the site of an old Hindu temple, and thus the Hindu community still holds the site as sacred. On the sixteenth day after Easter, the church’s annual feast day is celebrated here by both Hindus and Christians – one of the best examples of the way in which Hinduism and Christianity often coexist merrily in Goa.

Maruti Temple, in the centre of town, the small, pastel- coloured Maruti temple was built in the 1840s at a site where Hanuman was covertly worshipped during more oppressive periods of Portuguese rule. After temples had been destroyed by the Portuguese, devotees placed a picture of Hanuman at the fireworks shop that stood here, and arrived cloaked in secrecy to perform pujas (prayers). In April 1843 the picture was replaced by a silver idol and an increasing number of worshippers began to gather here. Eventually the business community of Mapusa gathered enough funds to acquire the shop, and the temple was built in its place. The intricate carvings at the doorway of the temple are the work of local artisans.

A Brief insight into history